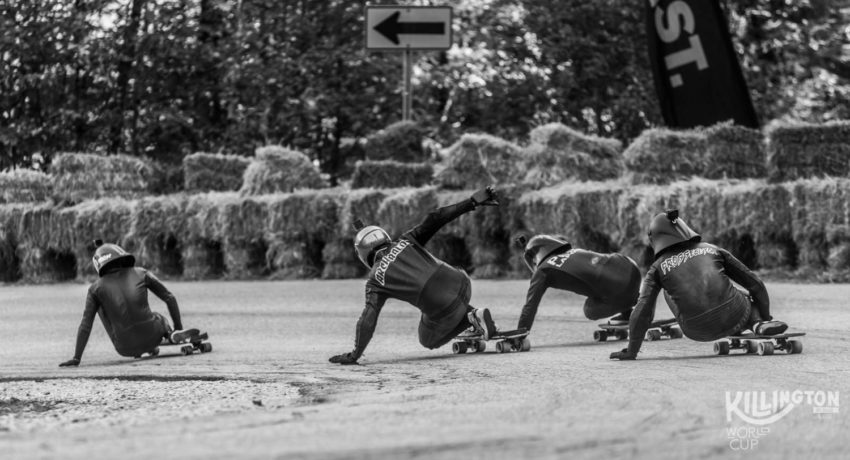 What makes a top racer in 2019: Dedication, progression, innovation, strength, and gumption. The level of competition has risen to an all-time high. The top riders have spent their off season training day-after-day, both in the gym and on their boards, to earn the title of 2019 World Champion. As the season opens, we look back at last years’ top-ranked riders, in both Open Skateboard and Luge, to honor their past achievements and anticipate the achievements yet to be.

1. Thiago Gomes Lessa, Brazil
- 3rd in 2015
- 2nd in 2016
- 1st in 2017
- 1st in 2018
A two-time world champion, with eight track records, Thiago dominated the World Circuit in 2018 and will be the champion to beat in 2019. With six years of racing IDF under his belt, Thiago has mastered the majority of the courses on the circuit. He won every World Cup he attended last season, including Newton’s Nation in Bathurst, Australia. Newton’s will be the first race of the season, kicking off the Asia Pacific continental tour.

- 2nd in 2018
‘Pepe’ started his IDF racing career as a Junior in 2013. In 2016, he earned his first IDF podium with a third place at 7 Curves World Cup race in Águas de Lindóia, Brazil. He has since earned the IDF South American champion title in both 2017 and 2018. His top World Cup finishes of last season are 2nd place at Yaku Raymi (Peru), 3rd place at Verdicchio (Italia), and 3rd place at Newton’s. For Pepe to trump his 2018 World ranking, and go for the title, the ‘student will need to beat the master.’

Thiago and Pepe spend their offseason together; sharing training spots and performance tips. These two create a powerful duo that is taking the IDF circuit by storm.

3. Daniel Engel, USA
- 3rd in 2018
'Dangel' burst on to the IDF World Circuit in 2017, and held the 1st place ranking for half of the season. He boasted his first World Cup win in 2018 with Yaku Raymi in Huallin, Peru, after the entire finals heat crashed, including Pepe, Josh Evans (ranked 4th in the World), and Harry Clarke (ranked 6th in the World). As another Newton’s finalist, the start to the season may be full of heavy hitters with history.

4. Josh Evans, Australian
- 4th in 2018
Racing IDF for six years, ’Jevans’ held his first title as the Asia Pacific champion in 2018. As a 2019 fan favorite, and Newton’s finalist (with the second fastest track time at Newton’s), you can expect Jevans to lead the pack as the upcoming season unfolds. If Jevans is able to take home the gold in 2019, then he will be the first Australian IDF World Champion.

5. Emily Pross, USA
- 5th in 2018
Women’s four-time World Champion, also known as the ’Prossecutor,’ Emily made history in 2018 by being the first women to win Open’s category at an IDF event. She started the season strong by defeating two previous IDF World Champions at Keeping it High Seaside in the Philippines. She ended her Asia Pacific tour just as strong with a second place at Arirang Hill World Cup. She was also the first women to earn an Open’s continental title when she ranked first in North America in 2017. The Prossecutor is one to bet on, as she won’t be satisfied until she’s earned THE Open’s World Championship.

-6th in 2018
Although less known, Harry is not to be underestimated. He holds the track record at two courses, including Transylvania; arguably one of the fastest and most technical courses on the IDF circuit. He earned a third place at Arirang Hill World Cup in 2018, another formidable race track with speeds up to 100 kph. Harry has been spending his offseason training with Jevans in Australia and is the 2019 underdog to root for.

1. Kolby Parks, Canada
- 2nd in 2015
- 2nd in 2016
- 1st in 2018
With three track records and six years of racing IDF, Kolby spent 2015-17 ‘nipping at the wheels’ of former World Champion Abdil Mahdzan (Malaysia) before earning his own World Championship in 2018. As the first Canadian to win the IDF Luge Championship, he is out to defend his title in 2019 in hopes of becoming a 2x World Champion - starting with Newton’s where he will come head-to-head with Abdil, and set the tone for the season.

2. Will Stephenson, UK
- 3rd in 2017
- 2nd in 2018
Although less experienced racing IDF, with fewer track records, Will proved he is no underdog in 2018 when he surprise visited the South American IDF tour and dominated BOTH Peruvian races in an incredible back-to-back first-place finish. These races allowed him to hold first in the world until Kolby 'swooped back the win' in the last race of the season. We hope to see many more surprise visits from Will in 2019!

With all this action, the 2019 season is destined to be HOT! Don’t miss a second of these heated rivalries and the battles that will determine the 2019 World Champions. You can follow the action at @idfracing; starting with Newton’s Nation, April 5-7.

Next race
All races »
Rankings 2019
OPEN WOMEN JUNIORS MASTERS LUGE
Search
Mailing
See an error ?
If you encounter an error, please click here to report it.