The world is watching and its time to deliver. Welcome to the IDF World Tour - the greatest show of downhill racing ever seen. This year we will have eight of the best World Cup race tracks ever ridden to showcase the best talent across the planet. Immersed in that will be a series of WQS events in Europe, North America and South America that will be the stepping stone to world cup glory and form the foundation of the 2013 IDF World Tour. 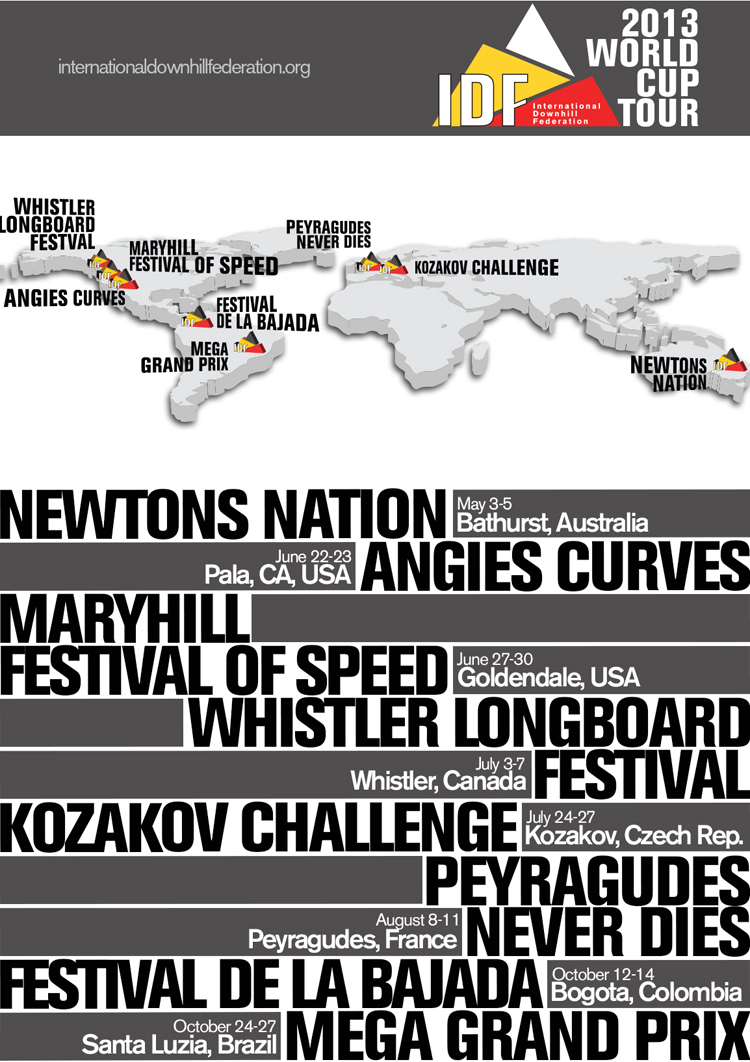 The IDF World Tour will begin down under at the world famous Mt. Panorama race track in Australia. As most of the you would be aware this is one of the most intense riding experiences on the planet with speeds regularly exceeding 100 km/h with super tight racing and danger at every turn. Every minute of the event will be broadcast via live video stream across the world as you watch competitors battling it out for prize money and the chance to lead the IDF World Tour. 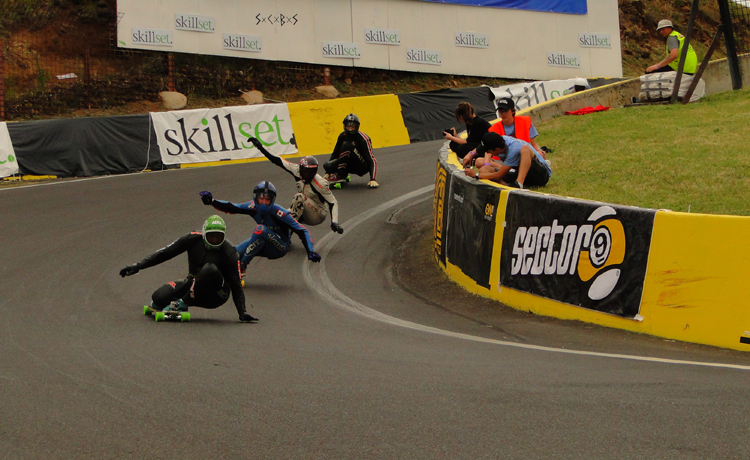 How could we have a World Tour without an event in Canada? The Canadian race scene is possibly the toughest place to conquer in the world. Years of gritty street and outlaw racing have honed a longboard scene with some of the toughest and most competitive riders around. The rest of the world will leave Washington State for Canada, when the IDF tour jumps the border fence, runs from the law, and avoids giant moose to get a piece of world cup glory at the Whistler Longboard Festival. This will be a new level of awesome with a week of skate events to tie into the main IDF World Cup event at the former Winter Olympics venue.

And so begins the great European adventure.... The tour will cross the Atlantic with competitors freeriding hills all over Europe before it slams head-on at Kosakov in the Czech Republic for a high speed thrill ride on a World Cup track that could only be described as fast and deadly. This track is as gnarly as it gets; super high-speed and highly technical. As usual there will be an enormous party on top of the hill which seems customary to the Czech experience. It is truly one of those events gifting the winner a legendary badge of honor that demands respect across the world. 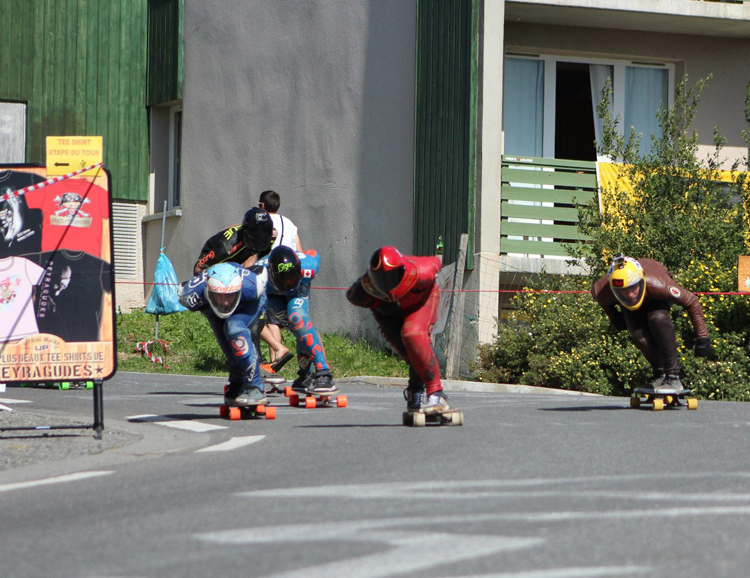 And so it was written...Peyragudes Never Dies. The IDF World Tour moves to the Pyrenees in France in the alpine station of Peyragudes. Maybe the wine and cheese taste better at altitude - something we will leave you to judge; what is not in doubt is the caliber of this World Cup event. The French races have always been some of the better-run races and this years Peyragudes will be no different. Riders will explode out from the alpine village start line and onto the big fast high speed cornering track that this mountain is known for. The best of Europe will face off against the best of the world to plunder this picturesque mountainside to determine who is the king of Europe. 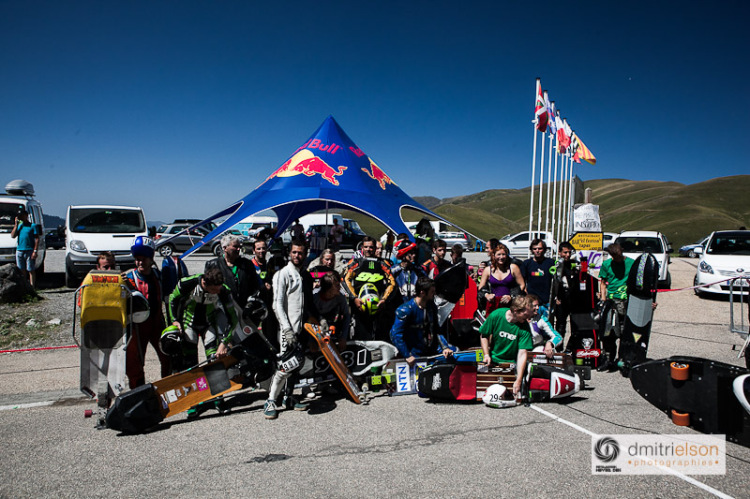 After a hectic European race leg the IDF tour will travel south of the equator and halfway across the world to the bubbling capital of Columbia - Bogota, for the Festival de la Bajada. This World Cup event will showcase the best South American and worldwide talent to the rest of the world as they battle for supremacy on the tight Bogota track. At 2600 m and with a bustling city of 9 million the oxygen around Bogota will be thin on the ground but the racing will be tight and the festive atmosphere will be ripe for a sensational example of South American downhill racing at its best. The Festival de la Bajada track is very tight and technical with lots of corners giving the spectators a close up view of the best riders in the world. 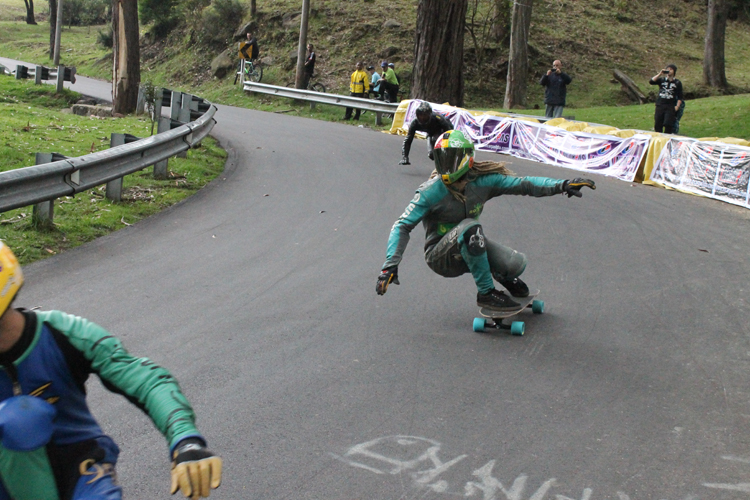 For the final World Cup round we will cross the continent and head toward Santa Luzia, Brazil for the Mega Grand Prix. This mountain top race track seems as though it was built for downhill skateboard racing; a super fast and smooth track with some wicked big hairpins. Like everything Brazilian it will be a festival of downhill on what is a superb track and the whole world will be watching and be on the edge of their seats via a live video stream to see who will be crowned the 2013 IDF World Champion.

This year will truly be one for the history books as the International Downhill Federation bring the most exciting riders to the best tracks in the world. With our new transponder timing system and new never before allowed race formats we will consign the long wait to history and give you the World Tour you have always wished for. Top riders, top tracks, great events - This is World Cup Racing and this is the IDF World Tour!